Known around the office as the ‘Humphries Tables’ our Vic/Tas Liaison Officer, John Humphries worked together with VicRoads policy group led by Ian Mond, to formulate an incremented table.  This provided a workable alternative to the 2016 notice which prohibited 4 and 5 axle cranes gazetted road access if minimum Ground Contact Width’s (GCW) were not achieved.

After the release of the 2016 4 & 5 axle Dimensional Exemption Notice, 90% of the cranes in the Victorian fleet were deemed too narrow to legally operate on public roads at 12-tonne per axle and were subsequently required to reduce weight by removing auxiliary equipment like counterweights, fly jibs, hook blocks and second winches.

Unfortunately for many 200-250-tonne capacity cranes that had no removable equipment, but still weighed 60-tonne, this excluded them from the notice and forced them to raise constant permits for every trip they made - rather that utilise the ‘Green Road Network’ which was designed for these cranes.

Many other cranes that failed (often by <30mm) to meet the minimum ground contact width were forced to run 10-tonne rather than 12-tonne per axle. While a line did have to be drawn in the sand regarding dimensional requirements, this was a crippling penalty for such a minute non-conformance.  Worse still 10-tonne per axle was not even achievable for many of these machines and if it was, the time taken to offload all the equipment, freight it on trucks and reinstall it on-site was at best uncommercial from a labour and time perspective.

The good news is that the 2018 Gazette offered 2 big bonusses:

1. An incremented table that allowed workable alternatives by way of reducing the allowable GVM of the crane proportionality if minimum GCW’s were not achieved rather than automatically bumping the GVM’s down to 50-tonne or 40-tonne

2. An across the board reduction of the minimum GCW by 30mm which instantly added more allowable weight to any crane using the tables

Thanks to Bridge Guru, Andy Ng - the  ‘Humphries Tables’ were accepted, enabling the allowable Gross Vehicle Mass (GVM) of the crane proportionally if minimum Ground Contact Width’s (GCW) were not achieved, rather than forcing non-compliant cranes back to 10t per axle.

The tables also reduced of the minimum GCW by 30mm which instantly added more allowable weight to any crane. 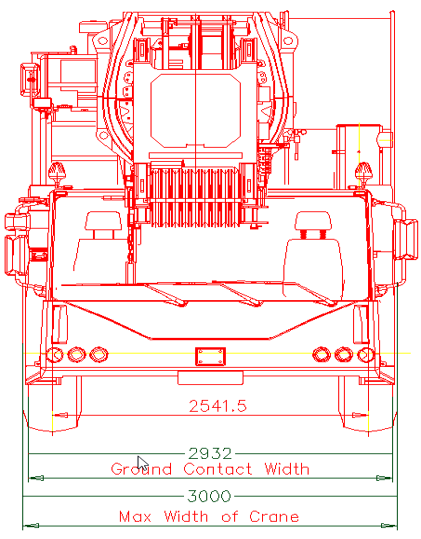 To run, the factory fitted steel rims need to be replaced with lightweight alloys to allow the 525 tyres to be installed without pushing the GVM over 60t this costs $10,000 per axle – $50,000 in total.
Now the 2018 Notice was lowered the min GCW from 2.95 to 2.92 which allows many cranes to run at 12t with factory wheels and 445 tyres removing the need for expensive alloy rims.